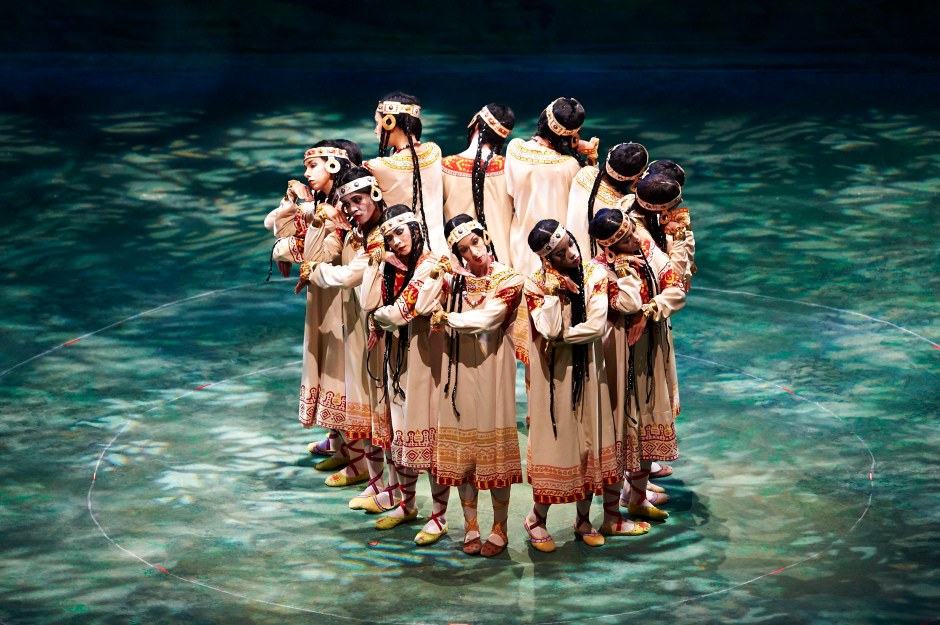 The Joffrey Ballet in Nijinsky’s “The Rite of Spring”. Photo by Roger Mastroianni.

Chicago’s Joffrey Ballet continued its longstanding relationship with The Cleveland Orchestra that began in 1971 with two performances at the orchestra’s summer Blossom Music Festival. Since 2009 the company has made annual appearances with the orchestra in the Cleveland, Ohio area; primarily at Cuyahoga Falls’ Blossom Music Center.

This summer was no different as Joffrey Ballet joined conductor Tito Munoz and The Cleveland Orchestra at Blossom for a program consisting of four ballets including their celebrated 1987 reconstruction of Vaslav Nijinsky’s iconic 1913 ballet, The Rite of Spring (Le Sacre du Printemps).

The program opened however with a slightly more recent masterwork, Jerome Robbins’ Interplay from 1945 with music by Morton Gould.

As its title suggested, Robbins’ 18-minute ballet in four movements (Free-Play, Horse-Play, By-Play,Team-Play) was an interplay between the dancers and the orchestra as well as between each dancer. Robbins’ Broadway-esque choreography for it was jazzy, lighthearted, and laced with a modicum of technical dancing.

Four male dancers began the ballet by hopping over one another. Four female dancers then joined them in classical jazz dance moves creating a scene that appeared out of a Gene Kelly movie of that era.

The dancers played off Gould’s music in a variety combinations and formations including one section where they broke into two teams of four (two males, two females) for a friendly dance competition. One at a time each team’s dancers tried to outdo a member of the other in a succession of showy solos packed with multiple pirouettes, double tours en l’aire (turns in the air) and chaînés (small, rapid turning steps).

The ballet’s decidedly playful approach and the dancer’s enjoyment of it, was a hit with the large Amphitheater audience and the many in lawn seating.

Said to be inspired by the inner workings of a clock, the mechanical-looking ballet in three movements began with dancer Anastacia Holden in a classical tutu surrounded by four male dancers performing dullish exercises in contemporary ballet technique; their choreography a series of solos looking like a classroom center barre exercise accompanied by Adams’ frantic, dissonant music.

The ballet’s second movement, a pas de deux between April Daly and Dylan Gutierrez, provided more interest. Packed with turns and athletic lifts, including several that had Daly arcing through the air, the pas de deux showed artistic complexity and musicality.

The final movement of the ballet returned us back to the score’s frantic beginnings.  A corps of six female dancers in tutus and on pointe moved through somewhat difficult classical steps, some referencing other known ballets. Overall, Welch’s choreography had the geometric feel of a Laura Dean ballet, but without her movement inventiveness.

Welch has created some fabulous ballets in his career such as Madame Butterfly, Of Blessed Memory and Divergence. Unfortunately, Son of Chamber Symphony wasn’t one of his better ones.

Next, former Bolshoi and San Francisco Ballet principal dancer Yuri Possokhov’s Adagio (2012) provided the perfect vehicle to showcase the stellar talents of Joffrey stars Victoria Jaiani and husband Temur Suluashvili. The 9-minute pas de duex set to music from the ballet Spartacus by Aram Khachaturian began with Suluashvili seated center stage and Jaiani moving in bourrée (quick, gliding steps on pointe) to meet him. The limber Jaiani’s body was then bent at near impossible angles as Suluashvili twisted, turned and lifted her into one beautiful position after another;   Possokhov’s choreography a vision of classical ballet elegance and grace. Both dancers performed the moving pas de deux with skill and passion.

The 36-minute ballet in two parts set to a groundbreaking score by Igor Stravinsky, tells of a primitive Slavic tribe and their pagan fertility ritual in which a young tribal maiden is sacrificed.

The ballet, originally created for Sergei Diaghilev’s Ballets Russes, is perhaps best known for the riotous reception it received at its premiere in Paris in 1913. Although it can be said its longevity as a dance work, having been the subject of countless reinterpretations, is directly due to Stravinsky’s brilliant score.

Meticulously reconstructed and staged by Millicent Hodson for the Joffrey, the ballet featured a large cast, simple backdrops and an abundance of colorful costumes.

A wonderful example of Nijinsky’s forward-thinking genius, with its non-traditional ballet choreography, Joffrey’s dancers performed the ballet admirably moving confidently through its myriad of geometric formations and patterns. Stomping feet and sharp arm movements punctuated dramatic passages in the music and gave voice to a disturbing story line, creating a palpable sense of impending doom.

Of note were ballet master Gerard Charles as the “Old Sage”, tracing a circle of light on the stage with his staff in a scene that was both mesmerizing and haunting; Joffrey’s corps of “Young Maidens” whose determined facial expressions and powerful dancing in the ballet’s climactic sacrifice scene was stirring; and the performance of dancer Joanna Wozniak as “The Chosen One”. Wozniak’s  performance, while admirable, lacked the emotional terror the role calls for and that I have seen from others in the role.

While considered a masterpiece in its own right, it is easy to see how modern audiences might find the 100-year-old ballet’s simple-looking steps and lack of bravura dancing a bit lackluster. But like any milestone work, its appreciation today comes in large part from revisiting a page in history. The ballet remains uniquely compelling and its score a masterpiece.

Stylistically diverse as the four ballet on the program were, Joffrey Ballet has programmed better evenings in past years at Blossom. Save The Rite of Spring, the program lacked the excitement and emotional impact to make it a memorable one.